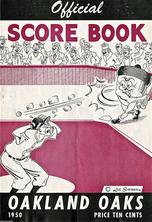 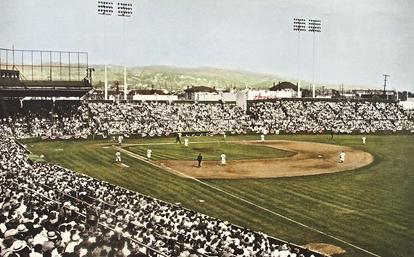 The Oakland Ballpark, home of the Oakland Oaks was actually located at Park and San Pablo Avenues in nearby Emeryville and constructed in 1912. The Fighting Oaks responded by finishing dead last. Oakland would have to wait 15 years before winning their second title. In 1927, George Boehler led the PCL in victories (22-12) as the 120-75 Oaks posted their best season in team history.

Along with the Los Angeles Angels, Portland Beavers, Sacramento Solons, San Francisco Seals, and Seattle Indians, the Oaks were charter members of the Pacific Coast League, founded in 1903.

In their first year of competition, 1903, the Oaks finished last and finished either last or next to last place four more times before winning its first PCL pennant in 1912. The Oaks (or "Acorns" as they were also called) played their home games at Freeman's Park at 59th Street and San Pablo Avenue and at Recreation Park in San Francisco.

The Oakland Oaks were a minor league baseball team in Oakland, California that played in the Pacific Coast League from 1903 through 1955, after which the club transferred to Vancouver, British Columbia. The team was named for the city and used the oak tree and the acorn as it's symbols. 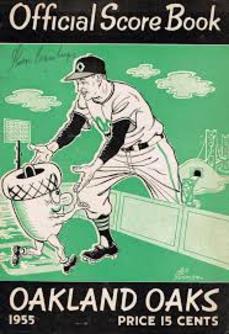 In 1943, a controlling interest in the Oaks was purchased by C. L. "Brick" Laws, who operated the team for its remaining seasons. In 1946, Laws hired Charles "Casey" Stengel, the former manager of the Brooklyn Dodgers and Boston Braves of the National League, to manage the Oaks. He responded with second and fourth-place finishes before the club won its most celebrated pennant in 1948. It was in Oakland that Stengel developed his talent for "platooning", i.e., juggling his lineup to maximize each player's potential in given situations, that served him so famously as manager of the New York Yankees, who he led to 5 straight titles after leaving Oakland.

The 1948 Oaks were nicknamed the "Nine Old Men" in that many of the star players were older veterans of the major leagues, including Ernie Lombardi, Cookie Lavagetto, Nick Etten and Catfish Metkovich. There were younger players on the team as well, including rookie second baseman Alfred "Billy" Martin. Rooming with Martin and playing shortstop was Artie Wilson who won the PCL batting title with a .348 average and also led the PCL in stolen bases with 47. In 1950, Wilson led the PCL in runs (168) and hits (264) while helping the Oaks win the 1950 PCL championship.

Stengel's success with the Oaks did not go unnoticed, and he became manager of the Yankees in 1949. Stengel was replaced by Chuck Dressen, who led the Oaks to a second-place finish in 1949 and the PCL pennant in 1950. Again, the Oaks' manager's success resulted in a promotion to the major leagues, with Dressen hired to manage the Dodgers in 1951. Former New York Giants star Mel Ott was hired as his replacement. Ott led the Oaks to an 80–88 record in 1951 (seventh place) and a 104–76 mark in 1952 (second place). Augie Galan replaced Ott as the Oaks' skipper in 1953, and the team stumbled to a 77-103 record and seventh place in the PCL.

HOME OF THE OAKLAND OAKS

Billy Martin learned how to stick up for himself at an early age and he got it from his mother. He grew up in Berkeley, California's west side and was often in trouble. The fistfight was a way of life while growing up in a tough neighborhood. At an early age, he KO'd a truant officer and once punched a cop. He got kicked off the high school basketball team for fighting, and then off the varsity baseball team after being goaded into a fight by an opposing player. Fisticuffs and trouble hoovered around Billy Martin like a dark cloud over Seattle. One reason why Billy got into so many fights was that he appeared scrawny and bullies thought that he would be a pushover. They found out differently. Another reason is that he didn't take any crap from anybody and neither did his mother Jenny.

After graduating from Berkeley High School, Martin became a 3rd baseman for the amateur Oakland Junior Oaks and then signed a contract for $200/mo to play for the level-C Idaho Russetts of the Pioneer League. There, at age 18, he hit .254 before signing with the "AAA" Oakland Oaks of the Pacific Coast League. After batting just .226 in 15 games for the '47 Oaks, manager Casey Stengel demoted the young infielder to the Phoenix Senators of the much lower level-C Arizona-Texas League. Martin hit .392 with a .538 slugging percentage in 586 at-bats which got him another chance with Stengel and the Oaks. The converted second baseman hit .277 for the 1948 Oaks at age twenty, and .286 with 12 home runs a year later prompting the Oaks to sell Martin and outfielder Jackie Jensen to the New York Yankees in a two-player deal -- $50,000 for Jensen, $0 for Martin. The 22-year-old Jensen hit .261 with 9 home runs in 467 at-bats for the 1949 Oaks.

Attendance had dwindled to just a little over a thousand per game at their crumbling ballpark in Emeryville. Semi-pro games in North Dakota were drawing more fanfare. 1955 would be the Oakland Oaks last year before moving to Vancouver, British Columbia, Canada. The Oaks were mostly bottom-feeders in the Pacific Coast League. They won four PCL pennants and one league championship during their fifty-three years while in Oakland. The Oaks was owned by Pacific Coast League founding father J. Cal Ewing from 1903 until the 1920s. Ewing also owned the San Francisco Seals, which allowed the clubs to share their ballparks at various times with no problem, but the leaders of Organized Baseball eventually made Ewing choose one or the other, and he divested his interests in the Oakland club. 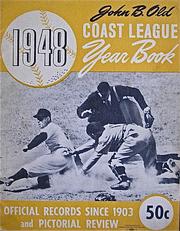 HOME BASE
View on Mobile