Billy Martin learned how to stick up for himself at an early age and he got it from his mother. He grew up in Berkeley, California's west side and was often in trouble. The fistfight was a way of life while growing up in a tough neighborhood. At an early age, he KO'd a truant officer and once punched a cop. He got kicked off the high school basketball team for fighting and then off the varsity baseball team after being goaded into a fight by an opposing player. Fisticuffs and trouble hoovered around Billy Martin like a dark cloud over Seattle. One reason why Billy got into so many fights was that he appeared scrawny and bullies thought that he would be a pushover. They found out differently. Another reason is that he didn't take any crap from anybody and neither did his mother Jenny.

The much ado about Billy Martin didn't end once his playing days were over. The fireworks continued. Even though Martin got his walking papers as a player from the Minnesota Twins in 1962, he remained with the organization as a scout, 3rd-base coach, and manager. Martin began his professional managerial career in 1968 when he took over the helm of the 7-22 Denver Bears (the Twins' Triple-A affiliate of the Pacific Coast League) and guided them to a respectable 73-72 finish. The next year, 1969, Martin became manager of the mediocre Minnesota Twins and skippered them to a 97-65 American League West Division pennant. Martin spent nine years in the Minnesota organization, climbed his way to the top, and won a pennant; yet still managed to get fired, a sign of the future. Once again, a couple of fistfights caused friction between Martin and the front office, this time with Twin's traveling secretary Howard Fox, and later, outside a bar in Detroit with pitcher Dave Boswell. Martin's eventual firing came after his "brash" comments in the newspapers that followed the Twins' American League Championship Series loss to Baltimore.

After staying out of baseball for a year, Martin returned in 1971 to manage the Detroit Tigers. Martin immediately turned a losing team into a 91-71 second-place team and a year later his 86-70 Tigers won the American League East Division. Martin was fired with 19 games left on the 1973 schedule after ordering his pitchers to throw spitballs and was immediately hired to manage the Texas Rangers for the '74 season. Martin transformed the lowly Rangers who finished 57-105 a year earlier into a contender with an 84-76 second-place finish in 1974. New Ranger owner and construction pipe magnate Brad Corbett fired Martin midway through the '75 season after an argument over player personnel. As long as Billy had his way, his teams fought for the championship but Martin was not the General Manager nor the owner. What are the team's weaknesses and who should be brought in to address those issues? Who should play and who should be sent down to the minor leagues? Who would know best? A man with 26 years of experience as a player, scout, coach, and successful manager or a rich businessman? In his autobiography, NUMBER l, Martin states that he'd never allow himself to get into that kind of predicament again ... then signed a contract with New York Yankee owner and shipbuilder George Steinbrenner, the greatest manipulator of them all.

Billy Martin did not play professional baseball in 1954 due to getting drafted into the army during the Korean Conflict. He was stationed at Fort Ord, California however got transferred to Fort Carson, Colorado after a dispute regarding his not being allowed to play for the Fort Ord Warriors, a military baseball team that had won the California semi-pro state championship in 1952 and 1953. Officers only and Martin was a lowly private. At Fort Carson, Martin was named manager of the base team and led them to a 25-4 record (15-2 according to other sources) where he pitched and played center field. He also made a few six-hour trips to Kansas where he led the 5-0 Goodland Tigers to a Hi-Plains title and a berth in the Kansas National Baseball Congress semi-pro state championship tournament. There, Martin led the Kansas state tourney with his .394 average and was named tournament MVP. The Tigers reeled off six straight victories before bowing to the Wichita Boeing Bombers in the finals. The Bombers went on to win the NBC semi-pro World Series. Of course, Martin got into a couple of fights while in the military. He punched a private for sleeping in his cot and later knocked out a sergeant after being harassed for not wearing a tie at a base movie theater.

After his discharge from the military in 1955, Martin returned to New York and hit .320 in 70 at-bats for the pennant-winning 96-58 Yankees. They lost the World Series in seven games to the Brooklyn Dodgers. Martin played in all seven games and hit .320 for the series. A year later, in 1956, Don Larson was named World Series MVP after tossing his 2-0, perfect game in game five. The Yankees beat the Brooklyn Dodgers four games to three. Billy Martin hit .296 (8-25 with two HR's) for the Series and .269 with nine homers during the regular season. A year later, Martin was traded to the Kansas City Athletics shortly after a phantom punch was thrown at the Copacabana Club where several Yankees, including Martin, were hanging out. The Yankees had had enough of Billy Martin the fighter. For the next five years, Martin would play for six different teams hitting between .246 and .257. During his 11 years in the majors, Martin combined to hit .257 with a .369 slugging percentage. During five World Series competitions, h hit .333 (33-99) with five home runs and a .566 SLG. Clearly, Martin played his best baseball when it mattered the most.

MARTIN LANDING A KNEE TO THE MID-SECTION

The fisticuffs continued, both on and off the field. In 1952, Martin slugged it out with Red Sox rookie shortstop Jimmy Piersall under the grandstands at Boston's Fenway Park and a few weeks later got into another scuffle with St. Louis Brown's catcher Clint Courtney. A year later, Martin got into it again with Courtney and also exchanged blows with Tiger catcher Matt Batts. Martin was a marked man and often opposing players would barrel their way into second base and Martin with spikes flying high.

He was the meanest and most surly man in all of baseball. Fellow Bay Area bad-boys "Swede" Risberg and "Prince" Hal Chase who both played roles in the 1919 Black Sox scandal, would appear as saintly choirboys standing beside him. Only Ty Cobb would have been in the same league as Alfred Manuel Martin. He became known as Billy because his grandmother called him Bello and Bellitz (both Italian for beautiful). 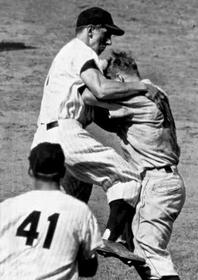 After graduating from Berkeley High School, Martin became a 3rd baseman for the amateur Oakland Junior Oaks and then signed a contract for $200/mo. to play for the level-C Idaho Russetts of the Pioneer League. At age 18, Martin hit .254 for the 1946 Idaho team before signing with the "AAA" Oakland Oaks of the Pacific Coast League. After batting just .226 in 15 games for the '47 Oaks, manager Casey Stengel demoted the young infielder to the Phoenix Senators of the much lower level-C Arizona-Texas League. There, Martin hit .392 with a .538 slugging percentage in 586 at-bats which got him another chance with Stengel and the Oaks. Martin, converted to a 2nd baseman, hit .277 for the 1948 Oaks and .286 with 12 home runs a year later prompting the Oaks to sell Martin and outfielder Jackie Jensen to the New York Yankees in a two-player deal -- $50,000 for Jensen, $0 for Martin. Martin made his major league debut with the Yankees on April 18th, 1950 and got two hits before getting sent down a month later to the "AAA" Kansas City Blues of the American Association. After batting .280 in 29 games, he was recalled by New York and wound up hitting .250 for the year while in a Yankee uniform. Martin spent part of the '51 season in the military and 51 games as a Yankee where he hit .259. The 95-59 pennant-winning Yanks beat the New York Giants in six games to capture the 1951 World Series. Martin got into one game as a pinch-runner. A year later, he became the Yankees regular 2nd baseman and hit .267 in 109 games as the 98-56 Yankees topped the Brooklyn Dodgers in a seven-game World Series. Martin started all seven games and hit .217. The following year, 1953, Martin hit .257 with a  career-high 15 home runs. The 99-52 Yankees moved on to defeat the 105-49 Brooklyn Dodgers in the 1953 World Series four games to two. Martin, the Series' MVP and winner of the Babe Ruth Memorial Award, led all hitters in batting average (.500, 12-24) Home Runs (2), Triples (2), and Runs Batted In (8). His .500 average, five extra-base hits, and two triples tied WS records. His 12 hits set a new World Series record for hits and his 23 total bases eclipsed Babe Ruth's record of 19, set 30 years earlier. Martin's heroics led the Yankees to their 5th consecutive WS championship. 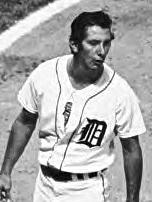 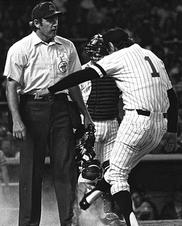 Martin's 97-62 Yankees won the 1976 American League East pennant but were swept in the World Series by the Cincinnati Reds. The following year, his 100-62 Yankees defeated the Los Angeles Dodgers 4 games to 2 to capture the '77 World Series. The Yankees again defeated the Dodgers in the '78 Series however Martin was fired midway through the season only to be rehired for the '79 season and fired again. Martin was old-school in his managing philosophy. He was demanding, pugnacious, and demanded respect, however, the days of Casey Stengel, Joe McCarthy, and John McGraw were over. No longer could Martin rid his teams of the prima donnas, slackers, and complainers. Yankee owner George Steinbrenner was attempting to buy championships by offering big six-figure contracts to Hall of Fame-caliber ballplayers, mostly from Oakland's World Series' players, and he wasn't about to trade or bench them because they didn't go along with Martin's style of play. Someone had to go and it was Martin. He was hired to manage the Yankees five times. He resigned once, was axed four times, and about to manage the Yanks again in 1990, however, he died when his truck plunged 300 feet and landed at the base of his driveway after a night of boozing.

In 1980, Martin was hired to manage the Oakland Athletics where his method of play became known as "Billyball", an aggressive style of baseball that included an emphasis on the hit-and-run, bunting, stealing bases, and hustle. A year earlier, the A's finished with a dismal 54-108 record but Martin immediately turned the franchise around with an 83-79 second-place finish. His 1981 A's ( 64-45 during the strike-shortened season) won the American League West and swept the Royals in the ALDS, but in turn, were swept by the Yankees in the AL Championship Series. Billy Martin managed parts of 16 seasons in the major leagues with five different teams, winning 1,253 games and losing 1,013 (.553 winning %). Martin had the ability to immediately turn poor teams into winners and average teams into contenders and champions. Say what you will about Billy Martin. When left to manage as he saw fit, he was among the very best. 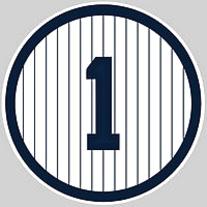 MARTIN READY TO DUKE IT OUT 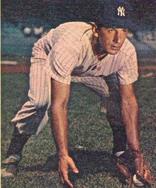 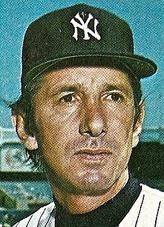