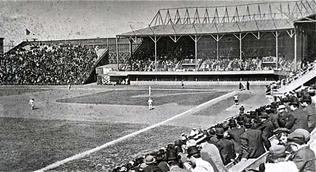 1935 SAN FRANCISCO SEALS: Francis Joseph "Lefty" O'Doul became San Francisco's new manager for the 1935 season and skippered the 103-70 Seals to their 10th PCL pennant, most by any team in the circuit's 33-year history. After winning the 2nd half of the split season, the Seals went on to defeat the Los Angeles Angels 4 games to 2 and claim their 2nd PCL playoff title. Twenty-year-old Joe DiMaggio led the Seals in batting with his .398 average, one percentage point below Mission's Ox Eckhardt's PCL leading .399 mark. DiMaggio led the PCL in RBI's with 173, total bases (456), and triples with 18. His 34 home runs, 270 hits, and .672 slugging percentage were all Seals' best and were 2nd-most in the PCL. Joe Becker from St. Louis, Missouri hit .372 (PCL's 3rd best) while Sacramento's Joe Marty hit .287 with 16 triples. A year later, Marty would lead the PCL in hitting with his .359 average. Sam Gibson again led San Francisco's pitching staff with a 22-4 record and 3.46 ERA. His .846 win % led the PCL while his 22 wins were one shy of Mission's "Boob-Boom" Beck's 23. Seal pitcher Ray Joiner from Red Bluff, California went 14-5 with a 3.74 ERA. His .737 win % was the league's 2nd best.

THE DIRTY THIRTIES:The stock market had crashed. The "Great Depression" began which would last for a decade. Thousands were fleeing the dust bowl states of the Midwest seeking agricultural work in Northern California. America was beginning to crumble but not in San Francisco, at least not in 1931. The Seals opened the season with an exhibition game against the Detroit Tigers in San Francisco's brand new ballpark at 16th and Bryant Streets--Seals Stadium with it's Romanesque facade and home to the Mission Reds and SF Seals of the PCL was possibly the greatest baseball field in the world at that time. She opened March 13, 1931 in San Francisco's Mission District, also known as the "warm belt" (fog-free during the summer) at a cost of 1.25 million dollars. Laborers worked for $3/day to complete the open-air structure with no canopies. Home runs came at a premium as her dimensions were 365' to right, 360' to left, and 400' to dead center field.

Walter Mails, born just outside the walls of San Quentin and noted as the most pompous, arrogant, and egotistical ballplayer ever to don a baseball uniform chipped in with a 20-12 record and 3.96 ERA. Mails self-proclaimed himself "Duster" Mails as the mean-tempered left-hander often nailed, dusted, or brushed batters away from the plate. He was also known as "Walter the Great" and he was just that after the Cleveland Indians paid the Sacramento Senators $35,000 for his services during the 1927 season. That September, Mails won 7 games for the Indians without a loss including 2 shutouts with a 1.85 ERA as the Indians won the AL pennant and the World Series. Mails pitched 6-plus shutout innings in game 3 and followed with a 1-0, three-hit shutout over Brooklyn in game 6. Mails who attended Christian Brothers High School in Sacramento and St. Mary's College spent 7 seasons in the majors with a career 32-25 record and 4.10 ERA. He also spent parts of 22 years in the minors (7 with San Francisco) with a career 258-235 record.  In 1923, he logged 356 innings for the Oakland Oaks with a 23-18 record and 2.96 ERA. 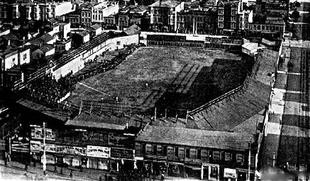 It would take a decade before San Francisco won their 11th pennant but the Seals won 4 consecutive Governor Cups during the World War ll era. In 1943, San Francisco finished in 2nd place with an 89 and 66 record however topped Portland 4 games to 2 in the first round of the playoffs and then claimed the league championship by besting Seattle by the same margin in the finals. A year later, the 3rd-place Seals bested Oakland 4 games to 1 before claiming another Cup by topping the pennant-winning Los Angeles Angels in a 7-game series. In 1945, the 4th place Seals defeated Sacramento 4 games to 3 and then took the PCL championship by taking Seattle in the finals. Seal's pitcher Robert Joyce from Stockton, California topped the PCL in wins with 31 and ERA at 2.17.

Mike Fitzgerald from San Mateo, California led the Seals in hitting with his .324 average. Fitzgerald hit .315 for the 1915 champion Seals and averaged .341 during his 11-year minor league career, mostly with San Francisco. He also spent part of the 1911 season with the New York Yankees (.270 in 16 games) and hit .293 in 66 games for the 1918 Philadelphia Phillies.

Jim Keasey led the '31 Seals in hitting with his .358 average followed by San Francisco native Frankie Crosetti at .343. Prince Oana from Waipahu, Hawaii hit .345 and led the team in homers with 23 and slugging percentage (.540). Shortstop Crosetti would spend 4 seasons with the Seals (career .320 average) before spending the next 17 years with the New York Yankees where he'd average .245 for his major league career.

The San Francisco Seals were Northern California's crown jewel of baseball for 55 years (1903-1957) until the New York Giants of the National League decided to relocate to San Francisco in 1958, sending the Seals packing and moving to Phoenix, Arizona. In 1903, San Francisco, along with the Los Angels Angels, Sacramento Senators, Oakland Oaks, Seattle Siwashes, and Portland Browns were charter members of the independent Pacific Coast League. A year later, the PCL joined the National Association of Professional Baseball Leagues and received Class-A status, highest at that time for a minor league team. The Seals initially played their home games at Recreation Park at Harrison and 8th Streets until the great quake of 1906 destroyed the ballpark along with most of San Francisco. The team moved into their new park, Recreation Park ll, built a year later at 14th and Valencia Streets where they played until the construction of Seals Stadium (1931-1957). The lone exception was 1914 when the Seals moved to Ewing Field, however, wind, fog, and poor attendance forced them back to Rec. Park ll a year later. 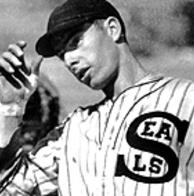 Smead Jolley was another pitcher turned slugger and could be considered as the "Babe Ruth" of the minor leagues. The Wessen, Arkansas native and son of a cotton farmer, began his professional baseball career with a 12-7 record with the Greenville Bucks of the "D" Cotton States League. In 1924, he went 9-9 for the Texarkana Twins of the East Texas League and also led the team in hitting with his .371 average. That same year, Jolley hit .511 with four home runs in 45 at-bats for the Class-C Bartlesville Bearcats. So much for pitching. The following season, Jolley hit .367 for the champion Corsicana Oilers and led the Texas Association in hits with 180. His contract was bought out by "AA" San Francisco, and later that same year, he got into 34 games for the Seals and hit .447 in 132 at-bats, not enough to qualify for the league batting title. Jolley spent 4 seasons in the major leagues (1930-'33) with the White Sox and Red Sox. In 1932, he led the Bo Sox in home runs (18), RBI's (99), and hits (164). His .309 average was the team's 2nd best. Jolley's outfield defense was so bad that Boston gave him a chance at catcher but he dislocated a finger; nor could he handle pop-ups behind the plate. He averaged .305 during his MLB career and returned to the PCL in 1934 where he led the Hollywood Stars in batting with his .360 average. Jolley led several leagues in hitting on 6 different occasions during his 20-year career including the International League in 1936 (.373) and the Western International League twice at the end of his career (.373 for the Class-B Spokane Indians in 1940 and .345 for Spokane and Vancouver a year later. He retired as a house painter in Alameda, California. Oil was struck at the family farm back in Arkansas.

Late in the 1928 season, the Cleveland Indians offered the Seals $100,000 for their three star outfielders as a package deal. Rejected. Roy Johnson was born on an Indian reserve in Pryor, Oklahoma before moving to Washington state where he attended Tacoma High School. He signed with San Francisco after playing semi-pro baseball in the SF Bay Area during the winter of 1925. Johnson finished the '28 season with the Seals and hit .360 with 22 home runs, both 2nd best on the team. His 29 steals led the team and his 16 triples led the PCL. After the season, he signed a contract with the Detroit Tigers worth $75,000. The next year, Johnson hit .314 and led the American League in at-bats (640) and doubles (45) as a rookie. He averaged .296 during his 10 years in the majors. In 1931, he led the AL with 19 triples and hit .320 with 119 RBI's for the Boston Red Sox in 1934. Johnson was the better all-around player of the 3 Seal outfielders. Although not quite as handy with the stick, he was faster with a stronger arm.

The '57 Seals were mostly a combination of former and future major leaguers. A year later, Ken Aspromonte from Los Angeles, began his MLB career with the Washington Senators. He averaged .249 over the course of 7 seasons (1958-1963) with several major league teams including a .290 season with 10 home runs for the 1960 Cleveland Indians. He also spent 3 years in the Japan Central League and combined to hit .271 for the Chunici Dragons and Taiyo Whales.

During the middle of the 1957 season, the New York Giants and the Brooklyn Dodgers announced that they would be relocating to the west coast and become the San Francisco Giants and Los Angeles Dodgers, thus eliminating any chance of the PCL becoming a third major league. Rather than attempt to compete with the National League, the Seals, Angels, and Hollywood Stars opted to leave town and operate in smaller markets. The Seals decided that if you can't beat them, then join them and moved to Phoenix, Arizona where they became the SF Giants' AAA affiliate--the Phoenix Giants. They continued their winning ways and won the 1958 PCL with an 89-65 record, topping the San Diego Padres by 4.5 games. Phoenix shortstop Andre Rogers from the Bahamas led the realigned league in hitting with his .354 average. The SF Giants played their 1st two seasons at Seals Stadium before making the same mistake the Seals made in 1914 by moving into the cold, foggy, and windy Candlestick Park in 1960. They remained there for 40 years without a WS championship playing before sparse crowds. In the year 2000, the SF Giants moved downtown to their new AT&T Park where they've played before sellout crowds and have won 3 World Series (2010, 2012, 1014). 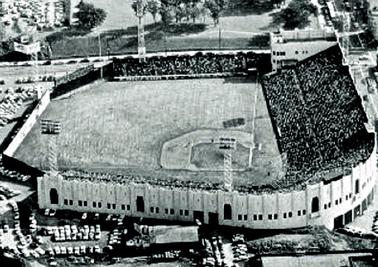 Joe DiMaggio was born in the small fishing village, now oil-refining town of Martinez, California, across the bay approximately 25 miles northeast of San Francisco. The DiMaggios moved to San Francisco's North Beach area near Fisherman's Wharf when Joe was 2 years old. There, Joe, older brother Vince, and younger brother Dom grew up and all attended Galileo High School before signing contracts with the Seals and later moving on to the major leagues. Joe DiMaggio first donned a Seals' uniform at age 17 in 1932. He got into 3 games as a shortstop after a recommendation from San Francisco outfielder and older brother Vince. A year later, Joe took his brother's spot in the outfield and hit .340 with 28 homers including a 61-game hitting streak, a minor league record and prelude to his coveted 56-game streak while with the NY Yankees in 1941, a MLB record that stands today.

San Francisco won their 1st PCL pennant (132-80) in 1909, finishing 13.5 games ahead of Portland. The 132 wins ranks as the 3rd most in minor league history. Left-handed pitcher Frank Browning from San Antonio, Texas, led the PCL in victories (32-16) including a 16-game win streak that still stands today as an all-time PCL record. On July the 5th, he tossed a no-hitter against Sacramento. Seal pitcher Cack Henley, 31-10, led the league in winning percentage (.736) and on June the 8th, the Sacramento native shut out the Oakland Oaks in 24 innings, the longest shutout in PCL history. Browning struck out 197 batters in 54 games while Henley K'd 188 in 46 games. Outfielder Henry Melchior led the PCL in batting (.298) while inf/of Rollie Zeider led the league in runs (141) and stolen bases (93). Left fielder Ping Bodie, from San Francisco, led the Seals with his 10 home runs.

Even though the 1928 Seals finished 6th in the league for team defense, their pitching was stellar with 3 experienced major-leaguers. Lefty Watler "Dutch" Ruether led the league in wins (29-7, 3.03) and Elmer Jacobs took top PCL honors in ERA (2.56), shutouts (6), and strikeouts (159). 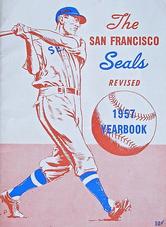 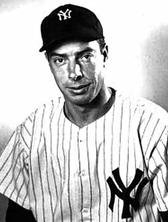