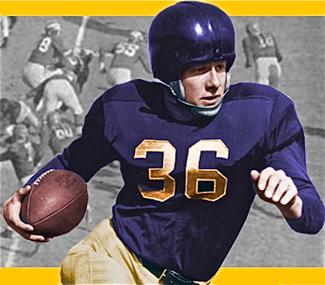 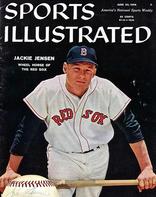 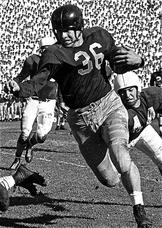 It's been noted that Jackie Jensen once said, "I'll get out of baseball--and I mean totally out. I don't want to be a manager, traveling secretary, league president, commissioner or batboy." He later became son Jon's little league coach in Tahoe. In 1968, he became an assistant coach for the University of Nevada Reno's baseball team and a few months later received his divorce from Zoe. The following March, Jensen at age 42 and now head coach, collapsed with a serious heart attack during a Wolf Pack practice. The suspected cause was extreme tension and his 2-3 pack per day tobacco habit. He recovered and that same year married Katherine Cortesi, the well-educated producer at KTVN where Jensen had a radio show. To get away from the stress, the two roamed the Nevada desert in search of arrowheads and other native artifacts. Still, Jensen could not get away from his passion for baseball. He became Cal Berkeley's head baseball coach in 1974 where he skippered the Golden Bears to a 109-95 record over the course of four years. His contract was not renewed after the 1977 season. Soon thereafter, Jensen and his wife moved to Fork Union, Virginia where they bought a 95-acre former tobacco plantation and converted the land into a X-mas tree farm. On July 14, 1982, before the trees had time to mature, Jensen suffered a second heart attack and died on his way to the hospital. 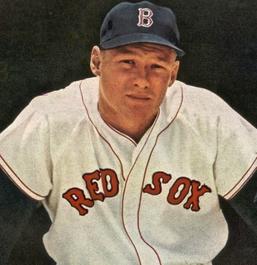 Jensen struggled with his duality of life as a major league ballplayer and that of a family man which began when he married Zoe Ann Olsen shortly before he became a Yankee. After winning her 2nd medal (bronze) in Helsinki, Mrs. Jensen gave up Olympic diving and her own limelight to became a stay-at-home mother upon the birth of their daughter Jan, their first child born in 1950. In the April 1959 edition of the Saturday Evening Post, Jensen was quoted as saying, "My ambition is to quit." And later in another publication, "I spend less than half my time with people I love most." There were problems with the IRS and taxes owed, so the Jensen's established residency at Incline Village, Nevada overlooking Lake Tahoe's Crystal Bay in order to avoid the brutal income taxes levied by the state of California. There, they became avid skiers and enjoyed the casino nightlife hobnobbing with Pittsburgh Pirate vice president Bing Crosby and Frank Sinatra. After the '59 season, Jensen threatened to quit baseball and become a Lake Tahoe building contractor. Although he yearned to spend more time with his family, Jensen continually engaged in off-season ventures that only drove him further away. He twice went on tours to the Orient with a group of All-Stars for a series of exhibition baseball games. He continued to co-own the Bow and Bell, a club and restaurant in Oakland's Jack London Square. He invested in two golf courses where he played and staged tournaments. He landed endorsements from Wonder Bread, Gillette, MacGregors, and Camel cigarettes which required the filming of commercials. He became a broadcaster and announced college football games alongside Keith Jackson for ABC. Jensen also landed a job with Harrah's Club in Reno as a PR man and later accepted the same position with Stateline Casino. The next day, Zoe Ann filed for divorce and all but bankrupted the once "Golden Boy"

Only a few gifted athletes have ever excelled in two or more major sports, especially at the professional level. Bo Jackson has been penned as among the greatest athletes of all-time and could be named as the "Ultimate Warrior". He won the Heisman Trophy as a running back at Auburn University in 1985 and starred for the Oakland Raiders where he averaged 5.4 yards/carry and 73.2 yards/game during his 4-year career (1987-1990). He never topped the coveted 1,000 rushing yards in a season but led the NFL 3 times for the longest run from scrimmage. Jackson also spent 8 seasons in the major leagues, mostly as an outfielder with the Kansas City Royals. He hit 20 or more home runs four years in a row (1987-'90) and also led the American League when he struck out 172 times in 1989. He averaged .250 over the course of his MLB career with 141 HR's and a .474 slugging percentage.

"Neon" Dion Sanders led the National League in triples with 14 and hit .304 for the Atlanta Braves in 1992. He spent nine seasons in the major leagues with four different teams and averaged .263 for his career. He also spent five seasons as a cornerback and kick returner for five different NFL teams. He led the NFL in six categories during his career and has been considered the greatest cornerback of all-time although he often looked the other way when a running back broke into the open field or even a quarterback on a scramble. Michael Jordan mastered the art of basketball and is considered by some as the greatest of all-time although statistics overwhelmingly point in Wilt Chamberlain's direction. In 1994, Jordan decided to give baseball a try. He hit .202 for the AA Birmingham Barons of the Southern League and quickly returned to the hardwood floors the next year. Michael Phelps is easily the greatest swimmer of all-time. He retired after the 2012 Olympics and opted to try his luck at golf. He was soon back in the pool.

The Boston outfield with Ted Williams in left, Jimmy Piersall in center, and Jackie Jensen in right field during the mid to late fifties (1954-1958) has been considered as among the greatest outfields in baseball history. The trio combined to hit 336 home runs during that 5-year span but the team never placed higher than 3rd in the AL while Jensen was with the Red Sox. Boston scored 700-780 runs per year during the late '50s while allowing around 700/year. By comparison, the Yankees scored a similar 700-800 per year however only allowed about 550 per annum. Williams and Jensen weren't the problem. Pitching and Bo Sox management for not going out and getting good pitching are to blame. Merciless Beantown fans and their Press often booed and hissed at Jensen and Williams. Williams gave it right back often flipping the middle finger and spitting at heckling fans. Jensen kept it all bottled up inside. He often suffered from anxiety and non-satisfaction with his and the team's results. First, he got passed over by future Hall o Famer Mantle and now he had to share the outfield with the greatest hitter of all-time.

Jackie "Red" Jensen was both fast and powerful, whether it be at the plate, on the mound or in the backfield. He was born in San Francisco and grew up in Oakland, Calif. where he and his two older brothers were raised mostly by their single mother who married four times. She divorced her 2nd husband, Jackie's father, when the lad was five years old. Jensen attended Oakland High School where he was class president, starred in football, and was a slugging-pitcher for the 1945 Wildcat baseball team. After a brief stint in the Navy, Jensen applied to Stanford University but was turned down as his grades weren't good enough. His marks were, however, good enough as far as liberal UC Berkeley was concerned. Jensen was a starting running back during his freshman year and a member of the varsity baseball team that entered college baseball's inaugural World Series. Cal baseball coach Clint Evans first proposed a National collegiate championship for baseball during the winter of 1947. Berkeley finished atop the Intercollegiate Baseball Association (Stanford, UCLA, USC, St. Mary's, and Santa Clara) tied with USC. After a one-game playoff win over the Trojans, the Bears were crowned league champs with their 12-4 record and along with their 27-10 overall mark, qualified for the Regional tournament in Denver. While the Bears were defeating Denver University 3-2 and Texas 8-1 in the West, the Yale University Bulldogs were topping Clemson and New York University in the East to advance to the first CWS.

Yale's first baseman and team captain was George H.W. Bush. The Skull & Bones secret society member would later become the United States' 41st president. In the 1st game of the best of three series, Jensen delivered a game-tying, pinch-hit single in the 7th inning which led to an eventual 17-4 thrashing of the Ivy League champs. Jensen started on the mound in game two and was leading 7-3 in the 5th inning before losing control of his blazing fastball and coughing up the lead. He received a no-decision as Berkeley went on to win 8-7 and claim college baseball's 1st national title. George Bush went 0-7 in the series and .208 for the season. He averaged .215 during his three years at Yale.

The following year, 1948, Jensen led the Cal football team to a 9-1 record as a sophomore but was academically ineligible to play baseball. Instead, "Red" suited up with the semi-pro Atwater Packers for the summer. In 1949, after summer school, Jensen set several Cal football records, most notably the 1st Cal player to rush for over a 1,000 yards in a single season and 1,700 career rushing yards. He also set records in the passing and kick return departments. Jensen scored two TD's and intercepted three passes in a 13-7 win against Southern Cal and rushed for 170 yards on 19 carries in a win over arch-rival Stanford as the Golden Bears finished the regular season at 10-0. Jensen was injured and sat out the 2nd half of the Rose Bowl in a 20-14 loss to Northwestern. He averaged 6.0 yards/carry, (another Cal record) during his three years at Berkeley and was named a consensus All-American after the 1949 football season.

In the spring of 1949, as a Junior, Jensen led the Bears baseball team to a 31-17 season and a 3rd place finish in the Intercollegiate Baseball Association. He shutout UCLA 3-0, hit over .300 for the season and was named 3rd team All-American. There were offers from both the NFL and MLB. There would be no senior year at Cal for the reddish-blond-haired bomber. Instead, Jensen followed his true passion and signed a professional contract with the Oakland Oaks of the Pacific Coast League; football injuries, money, and the wishes of 1948 Olympic diving silver medalist Zoe Ann Olsen might also have had a lot to do with Jensen's decision making. The 22-year-old Jensen hit .261 with nine home runs in 467 at-bats for the 1949 Oaks. Twenty-one-year-old Billy Martin, who attended Berkeley High School, hit .288 with 12 HR's in 623 at-bats for those same Oaks. After the season, both Oaklanders would be sold to the New York Yankees. 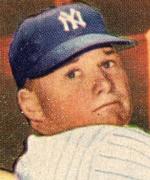 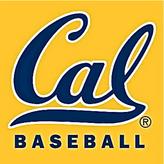 It was during his college days when Jack Jensen received the moniker, "The Golden Boy" and the "can't miss" label but the first few years of his major league career were anything but golden. In his rookie season with the Yankees, Jensen hit a paltry .171 in 70 at bats as a 5th outfielder and pinch-hitter. The starting outfield was Gene Woodling, Hank Bauer, and Joe DiMaggio. He responded the next year with a .298 average with 8 homers however got sent down to the minors after appearing in only 56 games. He hit .263 with the Kansas City Blues of the AAA American Association. Jensen was recalled by the Yankees later in the year but was left off the World Series roster. That winter he opted to give pitching another try in a Bay Area winter league. Even Yankee manager Casey Stengal toyed with the idea but after Jensen hit around .400 with power in spring training, it simply became a matter as to who was going to replace the retired Joe DiMaggio as the Yankee's next center fielder--25-year-old Jackie Jensen or 20-year-old Micky Mantle? Jensen got the distinction; however, after hitting just .105 in seven games for the Yanks, he got traded to the Washington Senators. Mantle took over and hit .311 with 23 homers and a team-leading .530 SLG for the 1952 World Series champions. As the Senators' new starting right fielder and hitting 3rd in the lineup, Jensen hit .286 with 10 homers and followed with a .276 and 10-homer season a year later before getting traded again, this time to the Boston Red Sox.