Lollis, along with his perfect pitching record (4-0, 1 save), went 5-11 at the plate (.417) and was named tournament MVP. Glen Dufour hit .350 (11-32). Wayne Hanscome also hit .350 (11-32) while Izzy Smith went 10-29 (.345) and Jack Androvich hit .310 (9-29). Lollis, Dufour, and Smith were named to the NBC All-American Team while manager Billy Rico was tabbed as the the tournament's Top Manager. The teams that Carmichael beat on their way to the finals were all ranked in the top-10 nationally. Both of he Firemen's losses came from the St. Joseph team from Michigan and their ex MLB pitcher Roy Henshaw. The 34 year old Henshaw, from Chicago, Illinois, had previously spent eight years in the major leagues (between 1933 and 1943) with the Cubs, Dodgers, Cardinals, and Tigers. He was 13-5 with a 2.28 ERA for the pennant-winning Chicago Cubs in 1935 and pitched three innings in the World Series. 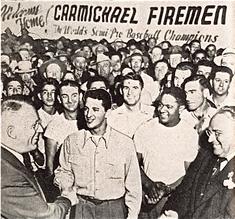 Carmichael pitcher Les Lollis won four games without a loss in the National tournament. He pitched 23 innings, allowed seven runs (2.73 runs/9 inn.), 20 hits, and 9 walks while striking out 15. Sunny Davey won one game while suffering both loses. He pitched 22.7 innings, allowing 14 runs on 29 hits and 10 base-on-balls. Babe Perry was 1-0, allowing 11 runs on 20 hits and two walks. With the exception of Lollis, Carmichael's pitching staff didn't do their job as far as Firemen goes. They  allowed 44 runs or 5.5 runs per game. It was their hitting, with five players batting over .310, that carried the Firemen to a 6-2 record and 2nd place finish, the best of any Northern California team in the history of the NBC World Series. St. Joseph received $10,000  while Carmichael received $6,848 as runners-up. A record 10,000 spectators watched the final.

The Carmichael Firemen, winners of the Sacramento County League, advanced to the California National Baseball Congress semi-pro state tournament with a tough 5-4 victory over Wolf & Royer of Roseville, winners of the Placer-Nevada League, in the Roseviile District qualifying tournament. Carmichael 2nd baseman John Parino, who had singled and advanced to 3rd base on an error, raced home with the winning run in the 12th inning after Wolf & Royer losing pitcher Dave Rodrick uncorked a wild pitch. Floyd D. "Babe" Perry went the distance to pick up the mound victory for the Firemen.

The 1946 California NBC state tournament held in Stockton included six other District champions--Camp Stoneman, the Atwater Packers, Stockton New Frog Inn, Vallejo Builders, Bakersfield Paper Company, and the Chico Colts, winners of the Marysville or "Peach Bowl" District. Chico advanced after a 10-1, best-of-3 playoff finale over the Oroville Olives. Carmichael opened the tourney with a 3-2 win over last year's state champion and tournament favorite Atwater. Les Lollis tossed the complete game victory. Carmichael headed to the finals after a 10-4 win against Bakersfield  and a 6-1 triumph over New Frog with Dave Perry and Sunny Davey picking up victories. Firemen center fielder Isadore "Izzy" Smith started the tournament with six consecutive hits. Camp Stoneman advanced by eliminating Atwater 7-2 in the semi finals. In the finale, Carmichael 3rd baseman Glenn Dufour went 3-4 with a triple and Les Lollis gained his 2nd win of the tournament with an 8-3 victory over a military team from Pittsburg, California. Firemen Lollis, Dufour, Smith, catcher Art Quadros, first baseman Wayne Hanscom, and Marz Dutra (utl.) were named to the All-State team. The state title qualified Carmichael with an automatic berth in the 12th annual NBC semi-pro National World Series held at Lawrence Stadium in Wichita, Kansas. It marked the only time that a team from the Sacramento area  has ever advanced to the National tourney. 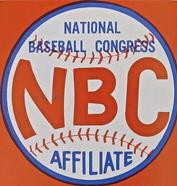 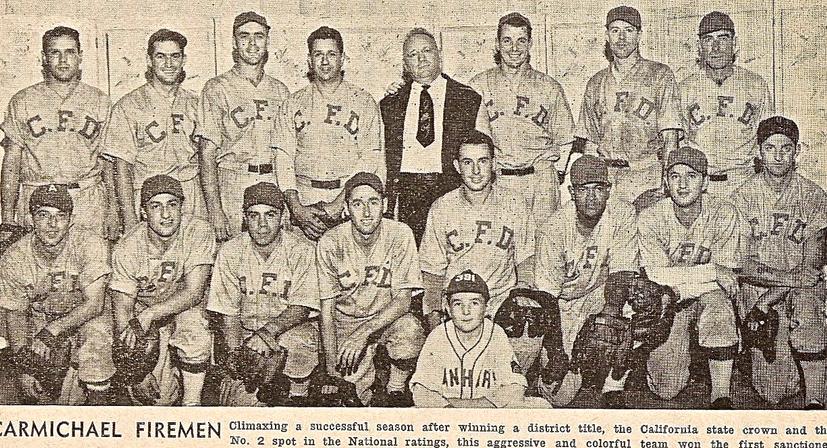 St. Joseph, Michigan declined the honor of representing the United States in the first Canadian-American Series. Carmichael accepted the bid to compete in the best-of-seven series that was held at Wichita. The Windsor, Ontario Auto Wreckers, winners of the Maple Leaf championship, represented Canada. The Firemen pasted the Canadians 25-12 in game #1 after scoring 12 runs in the 2nd inning. John Parino went 4-5 and scored four times in the rout. Dave Rodrick, a pick-up from Wolf & Royer, got the win. Carmichael won game #2 by a score of 6-5. Babe Perry got the complete game win while right fielder Les Lollis homered. The Americans made it three in a row with a 5-4 victory. Lollis got the win while Izzy Smith went 3-5. The Canucks rebounded with a 10-9 win ( Sunny Davey took the loss) before Carmichael pitcher Al "Spider" Zutz ended the series with an 8-2 win. Marz Dutra went 3-5. 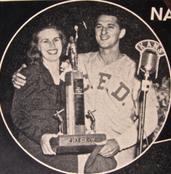 Five members of the 1946 Carmichael Firemen either had played professional baseball or would soon become professionals. Playing manager/inf Billy Rico got into three games with the 1944 Oakland Oaks of the "AA" Pacific Coast League (1-5, .200 avg.). He attended Christian Brothers High School in 1939 where he was a teammate of Wally Westlake and later played for the Redding Tigers in the Sacramento Valley League. Catcher Art Quadros hit .192 in 25 at-bats during his only year in the minors with the 1939 Ogden Reds of the "C" Pioneer League.  Al Zutz from Sacramento averaged .208 (16-77) during his two professional seasons (1944, '45). He went 0-1 for the Oakland Oaks in '44 and 0-1 for the Sacramento Senators a year later before hitting .213 in 24 games for the Visalia Cubs of the "C" California League, also in 1945.  Second baseman John Parino spent three years in the minors (1947-'49) and averaged .263 for his pro career. He hit .280 with five home runs for the Longview Texans of the "C" East Texas League in 1949. Pitcher Floyd "Babe" Perry logged two seasons in the minors with a career 12-10 record and 5.58 ERA including a final 3-1 year with the 1948 Spokane Indians of the "B" Western International League.

Carmichael's two best players, pitcher/outfielder Les Lollis and clean-up hitter Glenn Dufour never signed professional contracts, at least not with an affiliated major league team. It's been stated that Lollis once was member of the famed Kansas City Monarchs however published accounts of Monarch rosters from 1920-1947 do not support the claim. Third baseman Glen Dufour led the Fireman in hitting during the NBC tournament and Can-Am series. The following spring, he suited up for 1947 University of California Golden Bears where he was a teammate of the great Jackie Jensen. The Bears defeated the Yale Bulldogs and team captain George H.W. Bush (41st U.S. president) in college baseball's inaugural World Series. Dufour later spent several seasons in the Sacramento Valley League with Colusa where he was an All-Star 3rd baseman for the 1952 champion Prunepickers.

Carmichael returned to Wichita in 1947 with an automatic berth due to their 2nd place finish a year earlier. The Firemen finished in 4th place, tied with California state champion Atwater with 4-2 records. Marz Dutra led Carmichael at the tournament with a .440 average while Dufour hit .409. Les Lollis won a game while losing another. 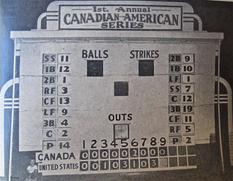