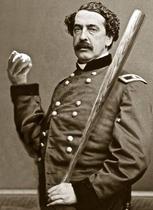 Albert Goodwin Spalding led the National Association (National Association of Professional Base Ball Players) in pitching during each of the league’s five years of existence (1871-1875). Some historians recognize the NA as base ball’s first professional major league. Major League Baseball and the Baseball Hall of Fame does not; instead claiming that the National League, founded by Spalding a year later, as the game’s first professional major league.

In 1876, Spalding and his brother Walter opened a sporting goods store in Chicago, Illinois. The company standardized baseballs and developed the modern bat with the bulge at its apex. The business quickly grew into a chain of franchises and wholesaler of athletic equipment worldwide. In 1911, Spalding published America’s National Game, considered by many as the first scholarly account of the history of baseball.

There is little doubt that A.G. Spalding, along with Harry Wright, played major roles regarding the history and shaping of major league base ball in its early beginnings; not only as players but also as managers, organizers, ambassadors, and major suppliers of athletic equipment. Spalding was also an owner and later became a respected baseball historian, however, his claim that Abner Doubleday was the inventor of the game of base ball was met with strong criticism; so much so that he organized a special counsel known as the Mill’s Commission to prove his point. The committee was headed by former National League president Abe Mills and included two other former NL presidents along with three other prominent base ball men including George Wright. Mills stated that base ball was strictly American and homegrown. The opposition was an English-born American sportswriter, baseball statistician, and historian by the name of Henry Chadwick who claimed that base ball evolved from the British game of rounders, which he played as a kid while growing up in the UK. Chadwick, a writer by trade, has been given credit for the invention of the box score with the symbol K for a strikeout along with the first calculations of batting averages and earned run averages. In 1867, he published The Game of Base Ball -- the first hardcover book on base ball. Chadwick was not a member of the Mill’s Commission.

The debate became a matter of Nationalism. Mills was a member of the 5th New York volunteer infantry at the beginning of the Civil War. Doubleday, who once lived in Cooperstown, New York, was a Civil War general and had fired the first shot in defense at Fort Sumner. Ads were placed requesting any information regarding base ball’s origins. After three years with little research conducted, the committee accepted a reply from Abner Graves who stated that he witnessed a game in Cooperstown, New York in 1939 and that Abner Doubleday was the organizer. Graves would have been five years old in 1939 and he later wound up in an insane asylum. Nevertheless, Mills and company accepted this folklore and Doubleday was credited as the father of base ball with Cooperstown getting selected as the site for Baseball’s Hall of Fame.

In his book, The Golden Game, Kevin Nelson proclaims that Alexander “Joy” Cartwright was the founder of the game of modern baseball when he altered and amended the rules of a gamed called “town ball” and formed the game’s first organized ball team in 1845 -- the New York Knickerbockers. The game of “town ball”, very similar to “rounders”, has been recorded as being played in New York and Philadelphia since the 1790s. Cartwright, or possibly a group of Knickerbockers, changed the square infield into a diamond with foul territory and no longer could a runner be called out when hit by a thrown ball while off a base. Nelson gives these original Knickerbockers credit for devising baseball’s first set of rules which were the original seedbed for all the refinements that have come since.

A.J. Cartwright ran a Wall Street bookshop, was a bank teller, part-time fireman, and “town ball” player. In 1849, he caught gold fever and set out for San Francisco by wagon train, leaving his wife, four children, and his Knickerbockers behind. He was to meet up with his brother who opted to sail by ship. Both journeys took about five months and neither made it to the goldfields. A.J. arrived in San Francisco with dysentery and after a week or two of recovery, set sail for Hawaii and never returned. Still, he has been given credit for planting the seeds of baseball in California. Such is history.