Manager Earl Yorton and his 1948 Yuba City Bears were led by former professional pitchers Frank Dasso and Ron DeLaHunt. Eleven years earlier, DeLaHunt was a pick-up for J.J. Kohn of St. Paul, Minnesota in the American Base Ball Congress Amateur World Series held in Battle Creek, Michigan and beat Dixisteel of Atlanta, Georgia 4-2 in the final to claim the National championship. In 1946, the left-handed DeLaHunt went 2-4 with a 5.73 earned run average for the Salina, Kansas Blue Jays of the level-C Western Association.

It's not known how or what amount of money the Bears paid for the services of ex-major-league pitcher Frank Dasso. The hard-throwing and often temperamental right-handed pitcher was born in Chicago, Illinois where he led his Lane Tech High School to the city championship with a 4-2 win over Austin High in 1936. The game was played at Comiskey Park. After a couple of years at the "C' and "B" professional levels, Dasso joined the 1938 Hazletown Red Sox where he led the level-A Eastern league in strikeouts. His 13-14 record included a 5-2 playoff victory over the pennant-winning Elmira Pioneers. A year later, while pitching for the Little Rock Travelers, Dasso tossed a 7-0 no-hitter against Memphis of the A1 Southern Association. Dasso spent three straight spring-trainings with the Boston Red Sox only to be sent down to the Pacific Coast League each year where he logged 10 seasons in the Pacific Coast League with San Francisco, Hollywood, San Diego, and Sacramento. In 1940, the Red Sox dealt Dasso to the SF Seals as final payment in the Dom DiMaggio deal. That season, Dasso led the PCL in strikeouts with 212. His best season was 1943 when he went 12-8 for the PCL's San Diego Padres. Dasso struck out 154 batters averaging 7.8 K's/9innings which led the Pacific Coast League while his 2.75 ERA and four shutouts were Padre bests. A year later, Dasso won 20 games (20-19) for the last-place Padres with a 2.81 ERA and six shutouts (the PCL's 3rd most) and again led the PCL in strikeouts for the 3rd time with 253. In 1951, at age 33, Dasso led the class-C California League in strikeouts with 210 while pitching for the Modesto Reds.

Towards the end of July 1948, Frank Dasso suddenly left the Bears and joined the Atwater Packers for California's National Baseball Congress semi-pro state tournament which left Yuba City shorthanded in the pitching department. The result was an exhibition game loss to the Loma Rica Olives of the lesser Yuba County Foothill League, although Loma Rica won the league with an unblemished 10-0 record. Atwater, the state's defending champs, lost the state title to Moffat's Manteca of San Francisco; however, the Packers represented the state of California at Wichita, Kansas in the NBC World Series where they finished in 11th place with a 1-2 record. Dasso struck out 14 batters but lost their opening-round game 3-1 to the relatively unknown Vermillion Eagles from South Dakota.

After losing 9-5 to the last place Red Bluff Stags on July the 16th, the 9-5 Bears reeled off six straight victories including DeLaHunt's 1-hit, 14-strikeout, 4-0 shutout over the Redding Tigers. During the Stags' loss, manager Earl Yorton was tossed from the game with fists clinched while arguing with the home plate umpire. The police were called in after the game when Coke bottles were tossed from the stands as the ump left the field. The Bears ended the regular SVL season tied atop the standings with the Oroville Olives with identical 15-5 records after thrashing the Colusa Pruners 21-1. In a one-game playoff, the Bears defeated the Olives 5-1 and claimed the SVL pennant. In a single game elimination playoff contest, the Bears chased Sacramento's Tony Separovich in the 2nd inning and defeated the Chico Colts 10-5. Dasso picked up the mound victory while slick-fielding shortstop George Nakao and outfielder Jim Blevins each went 3x5 at the plate. The win set up a best-of-three SVL championship Series against the 4th place Orland Tigers who surprised Oroville in the other semi-final.

In game one, Orland hammered DeLaHunt and the Bears 14-6 before Frank Dasso tossed a 4-hit, 3-0 shutout to even the series. Yuba's Bill Monahan homered for the Bears. In the final, DeLaHunt hurled the Bears to their first and only SVL title with a 7-2 win ending SVL play at 19-6. The bears played the Marysville Giants nine times in 1948, winning the first eight games while Marysville won the last game to close out the season. 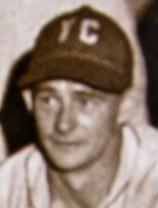 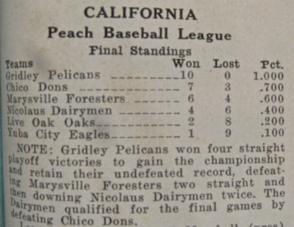 The Yuba City Bears fielded a baseball team as early as 1932 with manager Fred Stanfield at the helm. Other members of early YC Bear teams included Basil Stanfield, "Swede" Johnson, shortstop Sterns, and pitcher Bill Fleming. Fleming, from Rowland, California, spent a total of 16 years in professional baseball including six seasons in the major leagues (1940-'44, '46) where he compiled a combined 16-21 record and 3.79 ERA with the Boston Red Sox and Chicago Cubs. Fleming's best year as a major leaguer was 1944 when he went 9-10 with a 3.13 ERA for the Chicago Cubs. His father, Frost Fleming, moved to Sutter County and went into the farming business when Leslie, later known as Bill, was a youngster. Bill attended Sutter City High School for two years before dropping out and later opening a bar and restaurant in Yuba City. In the spring of 1933, Fleming was a member of the Marysville Giants, however, he quit the team and joined the Yuba City Merchants. In 1934, he married and led the Yuba City Merchants to a Placer-Nevada County League title. A year later, he pitched for the Yuba City Bears of the Sacramento Valley League, and in 1936, at age 22, Fleming signed a contract with the Mission Reds of the Pacific Coast League and was sent to the level-C Muskogee Tigers (New York Giants org.) where he went 12-11 with a 5.70 ERA. He had tried out for his uncle's team, (Dave Fleming owned the Los Angeles Angels) but didn't make the team. In 1938, at age 24, Fleming led the level-B Western International League in wins and ERA when he went 20-11 with a 1.79 ERA for the Bellingham Chinooks. In 1941, he led the "AA" Pacific Coast League Hollywood Stars' pitching staff with his 17-12 record and 2.77 ERA. Fleming spent parts of 16 seasons in the minors with a career 128-96 record and 3.82 ERA.

In 1935, the Yuba City Bears joined the tough Sacramento Valley League and finished the season at 12-6, going 6-3 and in 3rd place during both halves of the split schedule. The Marysville Giants won the 1st half with an 8-1 record while the Colusa Prune Pickers won the 2nd half with an identical 8-1 mark and later won the SVL championship. Yuba City was led by left-handed pitcher Chub Ohleyer from Sutter City or Sutter as it is known today. The Bears would spend two decades in the SVL winning their only title in 1948.

The Bear's clean-up hitter was catcher Bob Gallagher. Gallagher, a local walnut rancher from the Rio Oso area, had attended St. Mary's College. He remained loyal to the  Bears until the team folded in favor of the 1954 Yuba-Sutter Rebels which combined players from the Bears and Marysville Giants. During the 1949 season, Gallagher led the 2nd place (13-9) Bears in hitting with his .396 average, 2nd best in the talented Sacramento Valley League. During the middle of the 1953 season, while the Giants were in the midst of one of their greatest seasons, the Yuba-Sutter area held a celebration prior to the beginning of a game held at Marysville's Bryant Park. The special event was to honor a great Yuba-Sutter ballplayer. A rival Yuba City Bear was paraded around the park's inner perimeter in the back seat of a Cadillac. The event was called "Bob Gallagher Night".