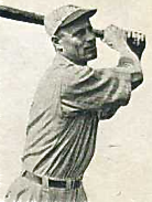 Marysville's twenty-year-old center fielder Frank Demaree from Winters, Calif. was in the middle of his second season with the Giants when he signed a contract with the Sacramento Senators. The loss of the team's number three-hitter in the lineup with his .381 average and league-leading five home runs would prove detrimental. He finished the year hitting .228 in 41 games for the Senators. The next year, Demaree hit .312 for Sacramento and a year later was hitting .364 with a .519 slugging percentage for the 3rd place Senators before the Chicago Cubs bought his contract. Demaree made his major league debut on July 22nd and finished the year by hitting .250 in 23 games for the Cubs. After a .272 year in 1933, the Cubs decided to send Demaree to The Pacific Coast League's Los Angeles Angels for the 1934 season. There, he won the Coast League's Triple Crown with his .383 average, 45 home runs, and 173 RBI's. For his efforts, Demaree has been featured on the cover of Bill Weiss and Marshall Wright's The 100 Greatest Minor League Teams of the 20th Century. Demaree returned to Chicago in 1935 and went on to spend a total of 12 seasons in the major leagues with five different teams where he averaged .299 with 72 HR's over the course of his ML career. 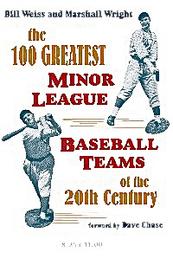 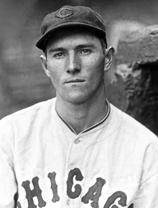 In 1917, at age 26, Couch made his major league debut with the American League's Detroit Tigers. He got into three games without a decision. Couch returned to the majors in 1922 with the NL's Cincinnati Reds where he posted his best year as a major-leaguer when he went 16-9 including two shutouts with a 3.89 ERA. Couch spent a total of five seasons in the majors with a career 29-34 record and 4.63 earned run average, the last two-plus years with the lowly Phillies.

Bill James was born in the remote, mountainous, gold-mining town of Iowa Hill, Ca., once known as Iowa City. In 1867, the area was producing $100,000 in gold per week. James attended Union High School in Oroville and then St. May's College to study engineering but instead discovered that he possessed a blazing fastball while pitching for the Phoenix. In 1911, James led the Marysville Giants to a Northern California championship after besting the Galt Tigers 5-4. He added a spitball to his repertoire and became known as "Seattle Bill" after posting a 29-7 record and 2.17 ERA for the pennant-winning Seattle Giants of the Northwestern League (Class-B). Thereafter, James went on to win 37 games while losing 21 with a career 2.28 earned run average while pitching for the major league Boston Braves (1913-'15, 1919). In 1914, he posted a 26-7 record and 1.90 ERA. His .788 winning percentage led the National League while his victory count and ERA was the league's second-best. He ended the regular season by winning 19 of his last 20 games for the pennant-winning 94-59 Braves.

In game two of the World Series against the Philadelphia Athletics, James tossed a 2-hit, 1-0 shutout. In game three, he entered the game in the 11th inning with the score tied at four apiece and picked up his second WS win in three days as the Braves went on to sweep the A's four games to none. James pitched a total of 11 innings in the 1914 Series without allowing a run and only two hits. Soon after, "Seattle" Bill's arm was gone due to "Dead Arm".

After bouncing around the minor leagues for a few years including a stint with the Sacramento Senators, James decided to move back home to Oroville and manage in the Sacramento Valley League. He guided Sutter's Clyde "Tub" Perry and the Colusa Prunepickers to an SVL title in 1929 and later managed the Oroville Olives during the 1940s. In 1917, James managed in the Trolley League for the Colusa Prune Pickers.

On the eve of the Sacramento Valley League's opening playoff game, Marysville pitcher Johnny Couch became ill with ptomaine poisoning. Nevertheless, he took the mound the following day and was defeated 8-5 by Joe Oeschger and the Chico Colts. The following Sunday, August the 7th, Couch gave up 18 hits as Oeschger and the Colts took game two by a score of 10-5. The next game, Couch pitched another complete game, this time allowing 17 hits however the game was deadlocked at seven apiece after nine innings. Chico's Ike Boone hit his 2nd homer of the game in the 12th inning giving Chico a 10-7 lead heading into the bottom of the 12th. Pitcher Wade Tartar had relieved Oeschger in the 11th but quickly gave up a two-run homer to Couch in the 12th. After Tony Dutra drew a walk, 38-year-old Colt Manager Bill James decided to take the hill himself.  He promptly issued two more free passes to Pappa and Mick Hall which loaded the bases with two outs and SVL batting champion Jack Hoagland stepping to the plate. A slow roller to shortstop Jonah Graf ended the game as Chico won their first SVL title after joining the league in 1925.

The 1930 Sacramento Valley League was a 2-horse race between the Marysville Giants and the Chico Colts. Both teams finished the regular season with 15-5 league marks with Chico winning the first-half title at 8-2 and the Giants claiming the second half with the same record. Both clubs featured aging ex-major league pitchers that pitched nearly every inning for the entire SVL season and a 38-year-old manager that decided the championship. Another player was featured on the cover of a book.

The Giants opened the season when 39-year-old pitcher Johnny Couch tossed a 5-hitter and got the best of Jim "Jiggs" Wright and the Oroville Olives by a score of 6-1. Wright, from Hyde, England, had spent the 1928 and '29 seasons pitching for the St. Louis Browns of the American League where he posted a 1-0 record and 5.79 earned run average. The Olives would release the ineffective "Jiggs" on May the 25th after the Giants hammered the Brit again 9-1. In a previous game, Johnny Couch was struck in the head by an errant baseball while sitting in the dugout before a game with the Sacramento Dantes. He pitched anyway and got shelled 16-6 by the hard-hitting Sacramentans. After losing 4-1 to Joe Oeschger and the Chico Colts, the Giants won six of their next seven games to finish the 1st half of the SVL at 7-3, one game behind the 8-2 Chico Colts. During that span, the Giants gained revenge by blasting the Dantes 31-4 while collecting 30 hits, both SVL records. They scored 10 times in the 1st inning. Marysville's center fielder Frank Demaree, catcher Franz Hall, 2nd baseman "Chick" Caselli, and Couch all homered for the Giants. The Dantes was the third sub-par team from Sacramento to enter the SVL replacing the Sacramento Wanderers who a year earlier had replaced the Sacramento Realtors of 1928. Pitching always seemed to be the problem. The Dantes were a traveling team that played all of their games on the road.

The Giants continued their winning ways by winning five straight to start the 2nd half of league play, including hammering Dantes again, this time, 16-9. Giants' left fielder Jack Hoagland, the league's top hitter, went 4-6 while fellow outfielder Frank Demaree went 5-6 including his 5th home run of the season, tops in the SVL. One of the homers was a grand slam. On July the 2nd, Couch improved to 10-3 on the year by hurling a 4-hit, 9-0 shutout over Joe Oeschger and his Chico Colts and followed with a 5-3 win over Oroville in 11 innings. The game marked the last for Marysville's Frank Demaree as the 20-year-old outfielder, who was batting .381 at the time, signed a contract with the Sacramento Senators of the AA Pacific Coast League. Marysville's 5-game win streak ended late in July when Chico's Oeschger outlasted Marysville's Johnny Couch with a 10-9 victory. Colt 3rd baseman Les Sheehan went 4-4. After bombing Dantes 16-7, the Giants again fell to Chico. Left-hander "Chub" Ohleyer, from Sutter, Calif., got a rare start and got the 5-4 victory. Marysville's Jack Hoagland hit his 3rd homer of the year. After blasting the Woodland Oaks 17-10 with Lee Boylan and Herman Richter hitting homers, the Giants closed out the regular season at 15-5 and an 8-2 second half-title with a 5-2 victory over the Colusa Prune Pickers. Boylan homered again. The 2nd-half title set up a best-of-five SVL championship series or "Little World Series" with the Chico Colts, winners of the 1st half. The Giants were the league's best hitting team with cleanup hitter Jack Hoagland capturing the SVL batting title with his .406 average. Johnny Couch and Chico's Joe Oeschger were the league's top pitchers, both with 15-4 records.